The Problem with Cash & Benefits of Digital Payments

Enabling digital payments to serve previously financial excluded communities for me is a fascinating topic. Digital payments in this respect is about so much than payments and technology, it enables the transformation of entire communities and more importantly their prosperity. So the recent case study by the Better than Cash Alliance – How Digitizing Agricultural Input Payments in Rural Kenya is Tackling Poverty. The case of One Acre Fund – is a must read, and full of interesting facts and figures around how mobile money is an important tool in the overall fight against poverty in rural areas.

In this post, i will highlight some of the problems referenced in the case study with cash and the benefits of digital payments. A couple of things to keep in mind:

The Problem with Cash

2. Inefficient, Distracting and a Pain to Process

OAF field officers spent most of their time collecting and dealing with cash, rather than what they ought to be doing – better serving farmers through financing, improving distribution channels, training and education

Unfortunately when people handle large amounts of cash some of it goes missing – either stolen or used for bribes. Where this happened, OAF investigations took weeks/months to resolve, if at all

5. Dealing with Cash is an Expensive Business

In 2014 OAF moved the way in which loan repayments were handled. OAF partnered with Citi to pilot a mobile repayments solution, using M-Pesa loan repayments were made directly from farmer to OAF. One challenge was the changing role of field officer from cash collector to a mobile money trainer and facilitator of the new way of making load repayments. 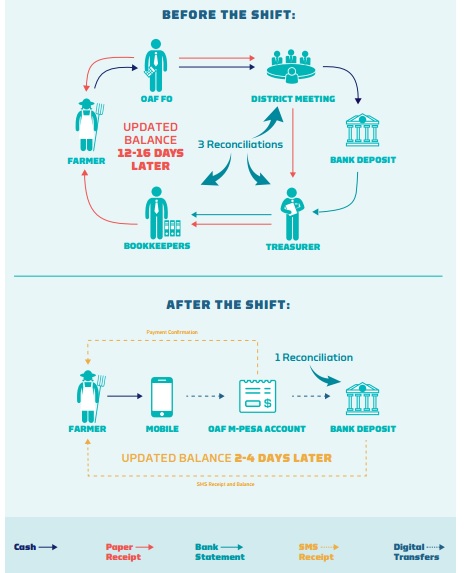 Source: Better than Cash Alliance
How Digitizing Agricultural Input Payments in Rural Kenya is Tackling Poverty: The Case of One Acre Fund

The Benefits of Digital Payments

The report cites a survey of 250 farmers conducted in 2015 which showed that all of them preferred mobile repayments over cash. With cash repayments (only possible weekly) the farmer only knew after a week if their repayments had been processed, now the farmer receives an SMS on the same day to indicate the new reduced balance.

Through the initiative, and increasing mobile money volumes, Safaricom enlisted mobile money agents in rural areas and this helped to expand the digital ecosystem in the country.

Fraud reduction is a big deal:

The move to digital repayments has resulted in an 85% reduction in what the report refers to as leakages – simply amazing!

From reading the report, you get a sense that every party in the repayment process has become more efficient:

Payments previously took around 16 days to process, now it takes around 2-4 days

Since OAF are not spending time handling/processing/reconciling/checking cash, OAF no longer need staff performing those roles. Previously OAF had 56 staff involved involved in counting cash and reconciling receipts – now they have a team of 4 ! This reduction in staff has presented some other challenges, but at the same time through thoughtful change management 41 of the staff were given new roles.

OAF no longer need to worry about handling/processing/reconciling/checking cash, so they have more time to can focus on their key objective – helping smallholder farmers. A study on the 2014 pilots highlighted that field officers were spending 214 minutes on repayment related duties per week, after digital repayments this was reduced to 116 minutes.